What is Scoliosis? Signs, Diagnosis and Physical Therapy as a Treatment Option

What is Scoliosis? It is an atypical bending of the spine to the side. Its origin can be a structural distortion in the vertebrae, a neurological disease causing an uneven muscular pull on the spine, or a congenital disorder.

Idiopathic scoliosis is the most common form, accounting for 80 percent of all cases. It is identifiable by a three-dimensional structural malformation of the spine. Scoliosis is diagnosed in 3-5 percent of the population, but only 10 percent of these cases will require treatment. A mere 0.1 to 0.3 percent of these larger curves progress to the point where surgery is an option, roughly 1 in 300 cases.

Adolescent Idiopathic Scoliosis (AIS) begins with the pubertal growth spurt, roughly around age 10 in girls and age 12 in boys. Early onset scoliosis refers to cases diagnosed before the age of 10. Cases diagnosed between the ages of three and ten are called Juvenile, and those under the age of three Infantile. Additional testing may be performed in early onset scoliosis to rule out neurological or congenital disorders.

The earlier scoliosis appears, the greater the risk of curve progression because of the amount of remaining growth. Sometimes curves are already large when scoliosis is first diagnosed. This is because it can appear suddenly during periods of rapid growth, and can easily go unnoticed due to the typical lack of pain. While we don’t yet know the initiating cause of scoliosis, we know it can run in families. Minor scoliosis is found equally in girls and boys, however girls have a significantly greater risk to have curves that progress. Curves can vary greatly in size and location and treatment options are based on the severity of the curve

Degenerative scoliosis, also called Adult Onset, can result from an undiagnosed adolescent scoliosis, spinal trauma, or degenerative changes of the spine. While these types of curves can be small in terms of the Cobb angle, they can be quite painful. Treatment in adults is based on symptoms, postural dysfunction, and prevention of curve progression.

Congenital scoliosis is present at birth and is quite rare, occurring only in 1 in 10,000 births. It can happen in any location of the spine. This form of scoliosis requires surgical treatment. Physical therapy may be provided as supportive care prior to or following surgery.

Neuromuscular scoliosis (NMS) is caused by an impairment in a child’s ability to control and support their spine. This type may require surgical treatment to provide spinal stability. Some of the conditions associated with NMS include muscular dystrophy and cerebral palsy.

Screening and Signs of Scoliosis

Idiopathic scoliosis can be discovered during a routine wellness visit, but is often first noticed by a family member. The most common screening tool is the Adam’s Forward Bend Test.  The person is observed from behind while bending forward as if reaching for the floor. This test looks for rotation of the spine or rib cage. Health care providers use a tool called a Scoliometer to measure the rotation. X-rays are recommended if that measurement exceeds 5 degrees. This simple screening test for scoliosis cannot accurately determine the severity of the curve. Some of the common signs to look for include:

Getting an Accurate Diagnosis

Standing x-rays of the entire spine from pelvis to neck are the gold standard for diagnosing AIS. They also establish the curve pattern by analyzing postural alignment which is important for exercise prescription. The Cobb Method determines the size of the curve by measuring the angle made between the top and bottom vertebrae of the curve. These vertebrae are selected based on the ones that are the most tipped. A formal diagnosis of structural scoliosis requires a curve greater than 10 degrees and observable wedging of the vertebrae. Curves under 25 degrees are considered mild, and those between 25 to 45 degrees moderate. Curves exceeding 45 to 50 degrees are considered severe and require more aggressive treatment.

Historically the treatment approach for AIS has been watch and wait with small curves, bracing for moderate curves, and surgery for severe curves.  Traditional physical therapy was not considered effective in the treatment of scoliosis.

Scoliosis specific exercise techniques based on the principles of Schroth offer a conservative exercise approach. While these techniques have been utilized in Europe for over 70 years, they are relatively new to the US. We believe this “try and see” approach offers not only effective outcomes, but empowers patients to be an active participant in their treatment.

This approach is appropriate for mild to moderate curves, and in severe curves in preparation for surgery or when surgery is not an option. The greatest results in the treatment of moderate and severe curves can be achieved when physical therapy and bracing are combined. Choosing the right intervention at the optimal time is a crucial step in achieving the best possible treatment outcome.

Symmetry Physical Therapy & Scoliosis Care is the first physical therapy clinic in the Pacific Northwest specializing in the conservative treatment of Scoliosis and Hyperkyphosis. Combining the scoliosis-specific exercise method with informed movement and structural integration creates a healing model unlike any other. Our goal is to educate, facilitate, and train you to move as smoothly and efficiently as possible and enjoy the activities you love. 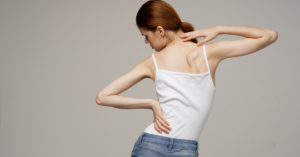 What is Scoliosis? Signs, Diagnosis and Physical Therapy as a Treatment Option

Explanation of the etiology, diagnosis and conservative treatment options of scoliosis.

Read More »
I’ve been to dozens of PTs over the last 30 years and for the first time I was taught how proper movement would decrease my back pain.
Steve
I learned to move in a way that supports the uniqueness of my body. For the first time in over 40 years back pain no longer limits my life.
Cathy
Gaylin helped me recover from several sporting injuries and regain my mobility following breast cancer treatment. I don’t know anyone who knows body mechanics better.
Nicole
I love how my treatment started with learning about my curve pattern and posture. The Schroth method has made a big difference in my ability to do things I enjoy.
Rochelle
As an aging yoga teacher dealing with multiple issues, Julia's knowledge and support made me look forward to our sessions. I’m almost sorry I’m healed. Almost.
Rebecca
Working with Julia my body is getting better, my relationship with my body is getting stronger.
Rose
I can never thank you enough for what you did for my daughter. You adjusted how she moved and occupied space. Now she stands tall and greets each challenge with confidence.
Renee
Gaylin was the first PT I've seen who understands scoliosis. Anyone with scoliosis understands how difficult it is to find help you can trust.
Gail
Previous
Next
Menu